“The unbroken productivity that from the middle of the nineteenth century has continued until the present day is proof of the sensitivity, intuition and ability inherited and enriched by a feminine presence which, with great respect, has preserved the practices and devotion of a bygone era.”

The Moretti Caselli Studio was officially founded in 1858 when Francesco Moretti began research into early glass-painting techniques for a commission by the Todi Cathedral. In 1862 a fullyequipped workshop was set up in the former convent of San Domenico in Perugia.

In 1862 a fullyequipped workshop was set up in the former convent of San Domenico in Perugia.

and then in 1895 was relocated to premises in Via Fatebenefratelli which Moretti had acquired from the Free University of Perugia the previous year, where it remains to this day. 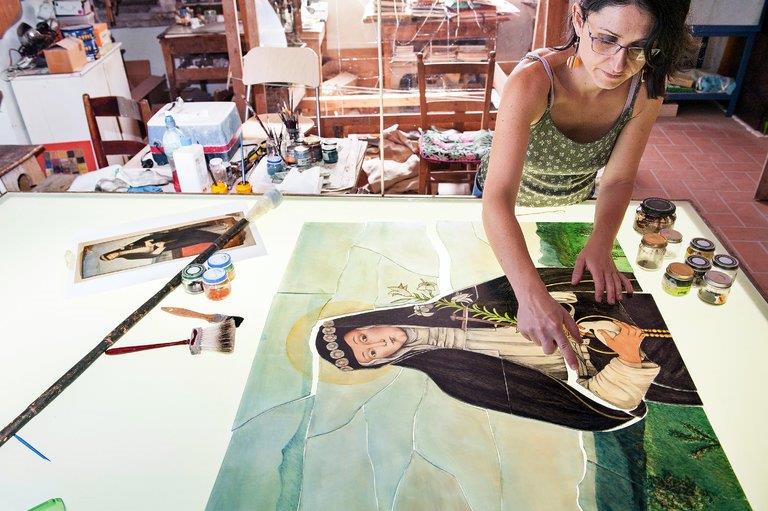 TUESDAY AND WEDNESDAY, days off (due to firing process)

Divided into two weeks, firing on thursday evening and having the work ready monday 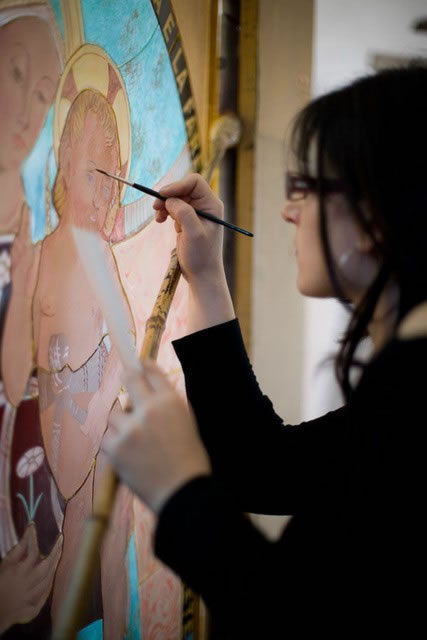 was a talented artist who began his career with a commission for two stained-glass windows for the cathedral in Todi (Umbria) . In 1862 he began restoration of the window in the Church of San Domenico in Perugia, while at the same creating other important stained-glass works including The Coronation of the Virgin, shown at the Paris Universal Exhibition in 1867, and St. John the Baptist (4*) for the Pieve di Arezzo (Tuscany), which won the gold medal at the Esposizione Umbra in 1879, the same year in which restoration of the San Domenico window was completed. In 1863 he was appointed to the Chair of Ornamentation at the Perugia Academy of Fine Arts, where he also taught Painting from 1874-1879, while acting as Director between 1892 and 1894.

In 1874 he became Director of the ‘Pietro Vannucci’ Municipal Gallery, a position which he retained for over forty years.

Among his many works, the Christmas Nativity Scene for the San Lorenzo Cathedral and the skylight for the Provincial Administration Building, both in Perugia (1873), as well as the beautiful portrait of Queen Margherita of Savoy (1881), shown in Milan in 1881, Rome in 1883 and London in 1888 (Studio Moretti Caselli Collection, Perugia), are worthy of note.

Lodovico Caselli (Perugia, 1859-1922), Francesco Moretti’s nephew, orphaned at an early age, was brought up by his maternal uncle who taught him the art of painting and the secrets of painting on glass.

Although at first Lodovico’s natural bent lay in painting, with various commissions for the Church of San Costanzo in Perugia (1890-91), the church of Carpineto Romano in Latium and the San Lorenzo Cathedral in Perugia (1896), as from 1883 he assisted his uncle in creating various stained-glass windows and from 1898 onwards added his own signature to the finished works. Some examples include large windows for the Church of the Sacred Heart of Mary (Turin), the Basilica of Saint Mary of the Angels (Assisi), the Basilica of Loreto in The Marches, the Church of the Holy Cross (Bastia Umbra) and restoration of Guillaume de Marcillat’s windows in Arezzo and Cortona.

His career included teaching at the Academy of Fine Arts in Perugia before becoming Director of the Academy and of the Perugia Municipal Gallery. After his uncle’s death he carried on the Studio’s activity, leaving to the city the stained-glass window depicting the Martyrdom of San Lorenzo which was placed in the cathedral in 1921.

At Lodovico’s death his daughters Rosa Moretti Caselli (Perugia 1896-1989) and Cecilia Caselli(Perugia 1905-1996) inherited the Studio and continued their father’s activity.

Rosa took on the responsibility of running the family business, and the two young sisters struggled on amid the difficulties that had arisen from the death of their brother, aged fifteen, from typhoid fever, and the death of a twenty-three-year-old sister a few weeks after the loss of their father.

Apart from completing the work begun by him in the Lower Church of the Basilica of St. Francis in Assisi, and others in Bastia and in Sinalunga (Tuscany), between 1922 and 1930 Rosa and Cecilia produced windows for the Basilica of St. Clare, the Basilica of St. Francis and the Chiesa Nuova in Assisi, the Church of St. Fortunato in Todi, the Cathedral in Camerino, the Arezzo Cathedral and the Seminary in Perugia. At the same time, between 1925 and 1930 they completed their stainedglass masterpiece, an interpretation of Leonardo da Vinci’s ‘Last Supper’ for the Glendale Cemetery (Los Angeles, California).

Rosa, who had trained as a primary school teacher, enrolled in the Academy of Fine Arts in Perugia and was awarded the title of ‘Academic of Merit’ in 1925, while Cecilia, whose name was later added to Perugia’s Roll of Honour in 1994, suffered from poor health, and attended informal classes at the Academy. Both sisters received special recognition from the Perugia Chamber of Commerce in 1988.

Anna Matilde Falsettini (Perugia 1948), Rosa and Cecilia Caselli’s great-niece, who learnt the art of glass painting from her aunts, completed her studies at the Academy of Fine Arts in Perugia and then taught Sculpture and Drawing from 1970 to 1977 before concentrating on the family’s traditional stained-glass production at the Moretti Caselli Studio.

Among others, she has made the windows for the parish churches in Passaggio di Bettona and San Marco, Perugia.

Maddalena Forenza (Perugia, 1980), Anna’s daughter, continues the tradition, having learnt the art of glass-painting from her mother. Her work can be admired on the counter facade of the Church of Santo Spirito in Perugia and in the Lemmo Rossi Scotti Castle at Santa Petronilla on the outskirts of Perugia.

The Moretti Caselli Studio will open its workshop to architects, artists, interior decorators, restorers and antique dealers and willingly share its experience and knowhow. A case in point is Elisabetta Forenza (Perugia 1976), Maddalena’s sister, who lives and works in Emilia Romagna, but who uses the studio’s facilities to produce sandblasted glasswork in an exquisitely personal style based on Lodovico Caselli’s technique.

It is to be sincerely hoped that the Moretti Caselli Studio will continue its tradition with future generations of the same family.

Please note: All extras such alcholic drinks or other services non included in the above list is due for direct payement at the front desk before the check-out. Not Included in Tuition: Airfare, Insurances, transportation to and from Malvarina and to lab location , field trips , outdoor painting, excursion fees, liquor, laundry, and meals outside the hotel.
see general info
see all accommodations